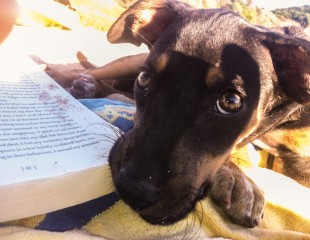 Our record breaking clinic! Held in the Town of La Crucecita. Over the 4 clinic days, 202 Dogs/Cats passed through our doors, each receiving the best Snipsister Care and Attention.

Special Surgeries/Treatments: One eye removal (Dog),  See the photo above. This is Lucero, A stoic male dog owned by a local family  in the area. Lucera came to our clinic with a badly infected eye, the only solution was to remove it to ease the pain. Lucero has never looked back (sort of speak!) He is doing very well and is recovering nicely. Thank you to his Vet Team, Antonio and Jimena! Post Op care provided by Roberto, our kind hearted friend who allowed us to use the courtyard on his property as our clinic site. Roberto, together with a handful of caring locals are working diligently at getting an animal shelter built in La Crucecita. After meeting and working with Roberto, we have no doubt that this will come to fruition!

As volunteers Gary and Sarita were driving back to the Coyula clinic after catching a run away dog, they discovered this tiny pup in a ditch, clearly homeless, very scared, starving, dehydrated and full of sores. Without a second thought, they brought her to Paulina, our Vet Tech who immediately assessed her health and deemed that with a protein rich diet, love and care, this little mite would survive! This was a lucky day for this pup. Sadly this is not the case for many many pups that end up living in the streets due to the overpopulation issues in these rural communities. All too many suffer a horrible life and death, from disease, starvation, poisoning or getting hit by cars. It is a heartbreaking reality that can be avoided humanly through sterilization.

END_OF_DOCUMENT_TOKEN_TO_BE_REPLACED

SnipSisters once again had two very successful clinics in the towns of Barra La Cruz, Coyula and Cuatunalco in December 2013.

We worked again with Vets Antonio and Poli, but this year we had the pleasure of meeting and working with Vet Technician Paulina for the first time. Paulina is a wonderful addition to the team. The three of them are officially called “Pets 4 Life” operating out of Puerto Vallarta. Each day we all work tirelessly side by side and a total of 202 dogs and cats were sterilized and were treated for internal and external parasites.

As with all our clinics, there always seems to be a need for a special surgery or two- beyond the snipping. This year, Iggy was our special case. Roughly 2 yrs old, withering in a corner, one of our volunteers noticed him apart from the other 4 dogs and cat owned by a single family in the small community of Tueheca. Iggy was very weak and thin, a sweet gentle male with a machete gash across his head that was so deep it went through his skull bone. Without hesitation we loaded up Iggy and the other 4 dogs plus the cat and headed for the clinic in Coyula. There, Poli meticulously began carefully cleaning and stitching layer and layer of tissue together. Once fully recovered from his sterilization and head surgery, armed with antibiotics and a care package of food, collars and leashes for all dogs, Iggy returned home and made a full recovery.

Machete wounds such as this are common and are inflicted usually by owners of female dogs. This is the harsh way some people try to prevent males like Iggy from pursuing a female dog when she is in heat. Again, all the more reason these sterilization clinics are so necessary -once males are sterilized this behavior stops.

This sweet gentle soul was discovered in the small town of Coyula during the Snipsisters Dec 2012 Clinic. We were returning a family of dogs to their homes after they had all been sterilized, it was then that we discovered “Charly” limping out of the bushes that were shading him from the hot sun. As he tried his best to give us a warm welcome, we immediately saw the reason for his limp. His back paw was swollen to twice the normal size with a large open gash, where we could clearly see broken bone protruding. Charly’s family slowly emerged from their yard and meekly told the story of him getting hit by a car 8 days prior.

END_OF_DOCUMENT_TOKEN_TO_BE_REPLACED

SnipSisters were at it once again, and were able to coordinate the sterilization surgeries of close to 200 dogs and cats in the towns of Coyula and Cuatunalco, Mexico. All the animals were also treated for internal and external parasites, given food on their release from the clinic, and follow up visits by the vets or the SnipSisters were made when necessary.

The SnipSisters also had the satisfying experience of being able to sterilize an abandoned litter of puppies found living in a hotel parking lot in the town of Le Crucecita. They were then able to coordinate the adoptions of the entire litter to loving families near the town of Cuatunalco. This is why they do what they do, and the support of the people and municipalities in all these communities is overwhelming. SnipSisters have made friends for life.

Alongside their surgical mission, SnipSisters also arranges for local vets to visit the surrounding schools to make presentations about spay and neuter benefits, caring for domestic animals, and general health and care guidelines for animals. The younger generations of school-aged children are the perfect audience for this kind of information, and SnipSisters urges the youth in each community to visit the clinics, speak with the surgeons, and even witness the procedures if they are interested. All in the name of education, outreach and exposure – SnipSisters is committed to trying to make a difference.